This morning I'm sitting in the doctor's office and I read "Earthquake 3.8 near Monette" on Twitter from the USGS feed. I instantly ask on Twitter if anyone felt it. I thought to myself that if a 3.8 Earthquake was centered in Monette, I should have felt the booger! And I did not... That was odd to me, but I still relayed the information from the USGS.

When the map was released, my friend Todd Yakoubian at KATV in Little Rock noted that the MAP showed it centered near Guy, AR. And the confusion begins... Once the dust cleared, the USGS changed their location and it WAS centered near GUY and not MONETTE. Despite the corrected location, the 3.8 earthquake was felt through Region 8. Look at the map below that shows where is was felt: 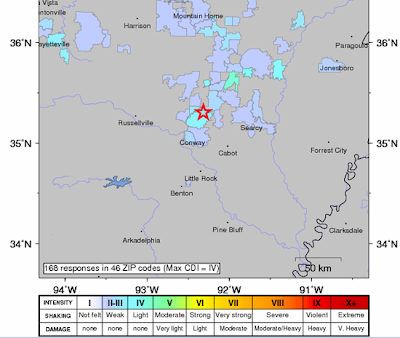 On Thursday, I'm presenting at a workshop at the NWS in Memphis. The topic is around Social Media and weather, but I'm going to touch on other natural disasters, too. Following this morning's experience, I'm going to talk about how fast information (right OR WRONG) can spread across the region. We're in a totally new world when it comes to information distribution. It's lightning fast and when there needs to be a correction, it better be as fast as the wrong information that was released!

So... did anyone feel the Earthquake? I'd love to know. Also, check out Todd's blog. He has done a GREAT job covering the earthquakes in Guy, AR even prior to the larger one this morning! His blog can be found on the right side of this page.

If you care to see the BAD info that came out at first, here's a screen grab: 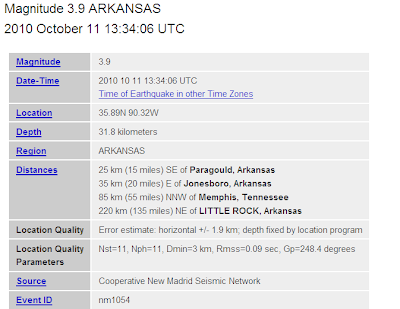 Ryan, wouldn't this update be automated from the USGS or does someone have to manually enter the information? I'm wondering how a computer glitch would have sent out the wrong location for an earthquake?

Hey, did they refer to Justin as chief meteorologist last night? Maybe they should since hes on more than you.