Where is Tornado Alley? 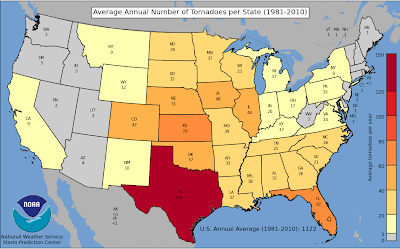 The above map was released by the SPC recently and it shows the number of tornadoes per state on average, per year, using the data from 1981-2010. At first, you would think that the most likely place to be hit by a tornado is Texas, but we have to remember that the data is skewed because of the size of Texas. This next map is a better representation. 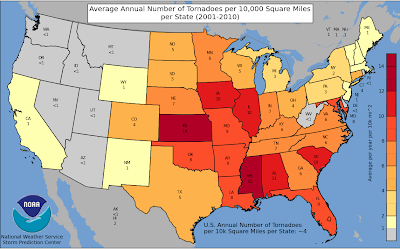 The above map shows the Average Annual number of Tornadoes per 10K square miles, per state. As you look at THIS map, you have to ask where tornado alley exist. I think a person could argue that tornado alley is a little more South and East than people think.

We have had some very quiet weather for a few months in Region 8. Let's remember that we typically see severe storms and tornadoes in the fall as well. Let me encourage you to review your severe weather plans at work, school, and home!

Thanks ryan:) glad u do ur research for us to keep us in the loop. Your the best:)

arkansas is in tornada alley isnt it??

Don't it start in the Dakotas and end in Arkansas?

Eh, I tend to disagree with the notion of the "southeast tornado alley". Tornado reports are skewed by the presence of population areas (cities, highways, etc). The larger states tend to have vast areas of low population density. Thus, tornadoes per state (first image) is skewed toward large states and tornadoes per fixed area (second image) is skewed toward small states. The correct approach is to use a statistical technique called "kernel density estimation". Doing so will result in a figure (such as this one: http://www.nssl.noaa.gov/hazard/img/ttor8099.gif) that depicts the probability of a tornado at grid points, which isn't biased by geopolitical boundaries.

A couple of interesting points...

1. Since 1950, Harris County, TX (Houston area) has the most number of tornadoes.

2. The area with the most tornadoes is actually northeast of Denver. These tend to be weak, non-supercellular tornadoes (landspouts).

Both of these are outside of most definitions of tornado alley!

True Patrick, but is this assuming that there are tornadoes that go unreported in places like Texas? I think the number of unreported tornadoes has gone WAY down in recent years. Wouldn't you agree?