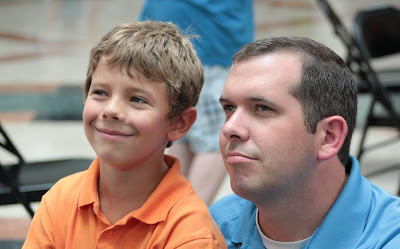 Nine years ago, my wife and I were sitting at the Jonesboro Christmas parade. It was COLD and we were walking the streets of downtown. My wife was 9 months pregnant and due at any moment. This would be the last day for us to go out alone without a babysitter for many years! After a day of errands and an evening at the Christmas Parade, we went home to sleep... a few hours later, she went into labor.

I was scared when I first became a father. I felt too young, too irresponsible, too broke, too weak, and too unprepared. I have come to realize that you are never 100% prepared and that you have to depend on God for guidance and preparation. I'm sure if you ask anyone if they felt prepared for their first kid and they would say no... I didn't feel prepared for #2 either... or #3 and #4. The road that my wife and I have taken is one that can only be supported by the strength of Jesus. It's been a blast, but not easy.

As I reflect on my oldest son's birthday, I can honestly say that I KNOW he is going to make me proud. In fact, he is already making me proud! He is a Christ-filled child. He makes straight A's. He's athletic. He's polite..... and he says yes sir and no mam! God has truly blessed us. He's not perfect and he can have his off days, but I am very proud to call him my son!

And God has blessed your son to have a loving, dedicated father and mother to lead him in his journey and to be strong role models. Thank you for sharing your thoughts with us about your life and your faith.