Um... There are Two Decks 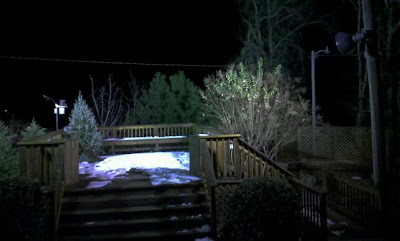 I have thought this before, I realized for sure tonight that there are people out there that think the trailer we pull behind the StormTRACKER in parades and events is the same "Weather Deck" we occasionally do weather on during the newscasts. That makes me laugh!

The weather deck that is permanent at KAIT is a multi-level deck that is perched several feet above the ground. It's VERY nice and if I did not mention it already... is permanent! There is a large deck on top, which has a rain gauge and several weather instruments, stairs that go down to another part of the deck, and landscaping all around it. There's also a Christmas tree that we need to decorate!

At 5:00, I showed the leftover snow on the weather deck (which is seen above) and when we rode in the parade tonight, 4-5 people asked why there was no snow on the deck! So, as I walked into the studio tonight, I took this picture to prove it.

I came across this post about the Kait Weather Deck. The truth will come out ;) http://www.thebuzzkillblog.com/2011/12/i-will-find-you-if-it-is-last-thing-i.html