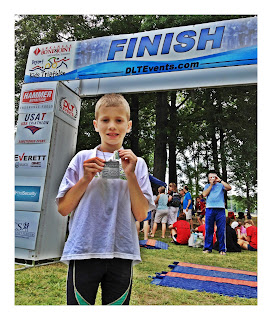 This weekend my youngest son finished his first Triathlon. He's a very athletic kid and I never doubted that he could do it, but I was a nervous wreck Saturday morning! I wasn't worried about him doing well, but I was worried that he could get hurt or do something that left him disappointed. No worries, he did awesome! 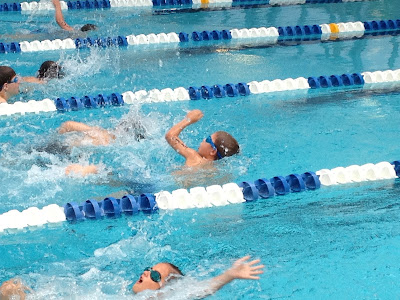 His swim was right on track. He's on the swim team, so I knew he would do well. It was not his fastest time at 50 yards, but that's good! In a Triathlon, it should be a little slower to save energy for the bike and run. He was about 5 seconds slower than if he did the 50 in a swim meet. Perfect. 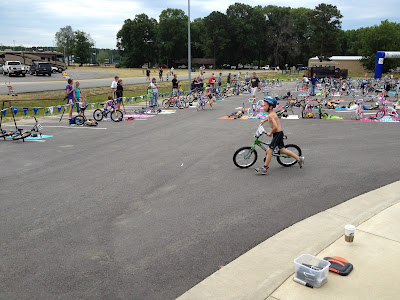 The transition was something Jenn and I both worried about! A triathlon is not a 3 event competition. It is a 5 event competition! You are still being timed when you transition from swim to bike and from bike to run. We went over it with him SEVERAL times on Friday and on Saturday morning. Needless to say, transition went great! Helmet on, shoes on, bike in hand... and off to the bike course! From a timing standpoint, George was about 4 minutes faster than I expected on the bike. Maybe I did not do my math right or maybe he just went a lot faster. Anyways, he surprised us. 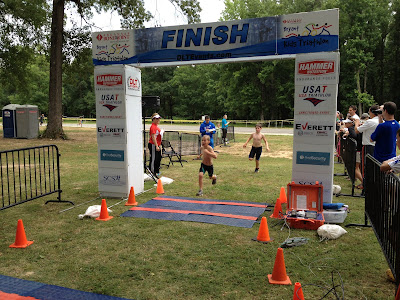 I did not get any pics from the run because he transitioned from bike to run faster than I could get to the run course start, but I was there at the end! As he came to the finish line, he was side-by-side with another kid. As he turned the corner, he hit the turbo! He jetted ahead and it was enough to finish third in his age group! He was even in a higher age group due to the rules and the date of his birth. Despite being 7 until December, he was in the 8 year old grouping. Not too shabby!

I'm proud of him! I'd be proud of him even if there was not a history with him and his health. For those that don't know, George is an accident-prone kid! At age 2, he had a spiral fracture on his leg that left him in a Spica cast. For those that don't know, a Spica cast starts at the chest, goes completely down one leg and to the knee of the second leg. Pretty much, it is a body cast. That was a very scary time as a parent. If you had told me that he would complete his first Triathlon 5 years later at age 7, I would have thought you were crazy. We weren't even completely sure how he was going to heal at that time! Dr. Schecter at AMMC did an amazing job with him and this weekend was a testament to the great medical attention George has received over the years. A big thanks goes to Dr. Noel as well for taking care of him through all of his other accidents that involved stitches, glue, shots, etc, etc.... :) Haha

I was looking through some of our old YouTube videos tonight and I had to watch this clip. This is when George started walking in his Spica cast one night! Some of you may remember, he was carried in a red wagon for several weeks. One night, he decided to walk in his cast!

I was thinking about this just yesterday! I was pulling Arya in the backyard in the red wagon and I thought about the amazing fact that G went from that to triathlon. Way to go!

This is such a good blog post for anyone that has a child in a spica cast; so many things go through a parental mind when a child has to struggle. This video brings it all back and compared to the triathlon video shows what can happen in only a few more years.

Ryan, thanks for your information. Sometimes people skip through the important information. My Brother (Russell) died as a 2 year old. He was born with Cerebral Palsy. That was back in the 1950's in Melbourne AU. My parents went through a process of 'Blaming'. They didn't talk. They couldn't stand one another for many years. As a result, my family became fragmented. And although both my parents have passed away, I still love them. They endured the great depression; WW2 and life in arid Australia. But they DID do it so GOD bless the strength of our human spirit.

Well done. It's great to see the young inhering the traits of the parent(s).

More power to everyone. Chin up fellas.