We're heading into a new territory of radar technology and how we verify if there is or was a tornado in particular storms. Thursday morning (just before 2AM), there was a storm (outside of Region 8) moving through Jefferson County, AR. Since it was outside of our viewing area, I was not keeping a close eye on it, but a friend in Alabama, Brett Adair, was watching radar for fun and noticed something interesting.. In addition to seeing some rotation using the velocity (wind) product, he saw a "hole" of lower Correlation Coefficient values. He messaged me to take a look and sure enough... there it was. It was something we are now starting to call a "debris signature". Do you see the little "hole" of blue within our scope?  (CC in scope) Click the image to enlarge: CC or Correlation Coefficient is one of the new radar products that we have started to use and show on air at KAIT using Dual Polarization radar technology. CC is simply showing the relation between the horizontal and vertical pulses from the radar. I won't get too deep into how it works, but here is a chart from NOAA that shows what the values can correlate to... Notice the last line: 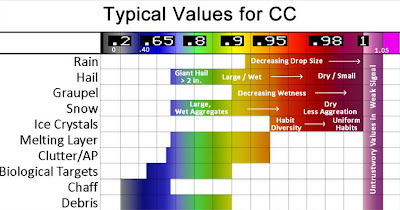 So, can we confirm a tornado from radar alone? Not so fast... Recent research has shown that even when we see radar signatures like this, it is possible to not have damage. The NWS is heading to this spot right now to see if there is damage. I bet they at least find some damage to trees...

As I mentioned earlier, the velocity data also supported a possible tornado. If you are interested in seeing it, here's an image from 1:59 AM. Velocity data is inside the scope: 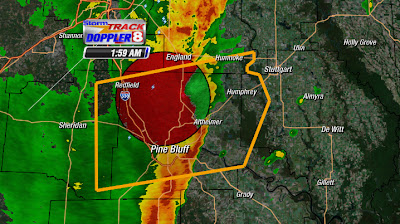 More blogging about the Christmas snow will come later today as well!

Low CC values aren't in the same spot as your velocity signature. Have velocity from a scan earlier so the locations match up?

I'll go back and try to grab it. This is just what I screen captured while watching it. The couplet was right on top of it though.

Typically, the CC will match up within a small area of the couplet. The fact it is that close means it is almost definitely debris. ZDR was also low in that area, which would indicate debris as well.

Typically, when looking for a tornado debris signature,you look at the velocity product, CC, ZDR, and reflectivity. In this case, the velocity showed a strong couplet with gate-to-gate shear; the CC showed an isolated area of low value, as did the ZDR, although it was tougher to detect on ZDR; and reflectivty in the area was well over 40 DBZ. All of that adds up to a debris signature. The survey will tell us more, but if there was no tornado, I would be shocked. The CC not matching up exactly with the SRV couplet could be explained by a different refresh time for the Dual Pol products, and, when looking for a debris signature, you tend to give a little room for the signatures. They need to be very close, but dont have to be in the EXACT same spot.