Light Sleet or Ice Thursday Night into Friday AM

As I mentioned Monday on the blog, there is a chance of a light wintry mix tomorrow night across Region 8. Let's first make this really simple by posting some bullet points about the event to avoid any confusion about the current thinking:


Ok, with all of that said, let's look at some data. First off, the Euro and GFS have shown this for several days. The NAM is now on board as well. Below is graph from a program called BUFKIT. It's a program that we can put several weather variables on a graph, to see them all at once. The time oddly goes from RIGHT to LEFT. The red line is the temperature and shows the temperatures at or below freezing. The orange and red bars shows LIGHT sleet and freezing rain Thursday night in Friday morning. Click image to enlarge: 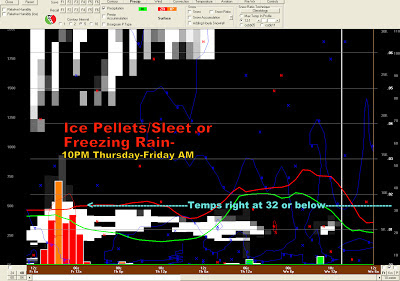 So, why will it be sleet or freezing rain and not snow? That's a question that I often get. Take a look at this forecast sounding for 3:00 AM Friday morning: 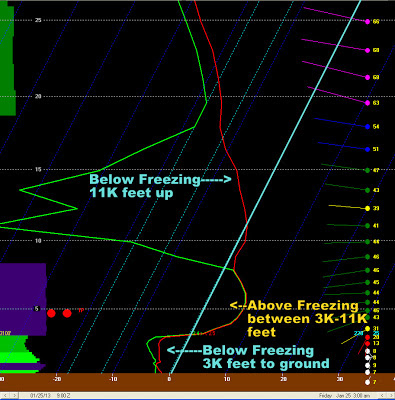 This shows the atmosphere from the ground up and what the temperature is doing as you go up through the atmosphere. The blue line is the freezing line. The red line is the temperature and notice that we should be above freezing between 3,000 and 11,000 feet, roughly. If that happened, snow would be impossible. Any flakes would melt as they fell through that layer. BUT, from 3,000 feet down, we are below freezing. Either the melted snowflakes (raindrops) will refreeze into sleet OR they will not have time to refreeze and will fall as liquid and will form an icy glaze on exposed surfaces.

I've been sick, but I'm better now and heading to work soon. Tune in tonight at 5:00, 6:00, and 10:00 for the latest information and follow my Twitter feed. I'm on vacation on Thursday and Friday, but will be posting some updates on Twitter and possibly here as well.