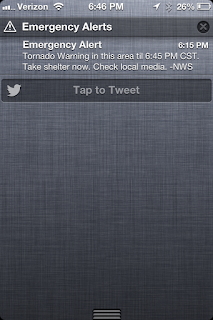 I can't stand false alarms. Whether it is a fake tornado report, exaggerated severe weather report, faulty tornado siren, trigger-happy official on the tornado siren button, or a new one today... false tornado warning on a mobile phone. Not just a few mobile phones, but most newer smartphones using a specific mobile phone service provider in the state of Arkansas!

During severe weather, I appreciate SOLID information. 30 seconds before I went on air, every Verizon smartphone in the studio and control room went off and said the above statement. There was no location given or specific information.

While I was trying to show everyone where it was raining and what we can expect over the next 7 days, I was wondering what in the world was happening. On one hand, I saw nothing on radar that would warrant a tornado warning. On the other hand, I was afraid that I was missing something and lives were at risk. It was a very uncomfortable feeling. Looking back, I'm glad it was nothing.

The storms are starting to move out, so let's all sleep well tonight.

Every cellphone period. Even our dumb phones went off

Thank you Ryan for watching out for everyone in Region 8... it must be a very stressful job at times. We appreciate all that you do to keep us safe.

It's funny but when I got the warning my first inclination was to ask you if it was legit. I trust you more than the notifications I get on my phone ha ha

thank you, Ryan for always staying on top of the weather and keeping us safe. I have living in Region 8 for about 30 years and you are by far my favorite weatherman! Missed you at Larry's Pizza in Paragould too on Sunday. Not sure where you at after church but i bet it wasnt as good lol