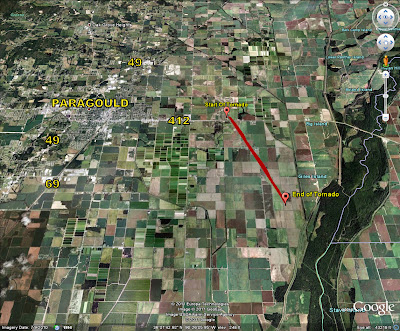 The above image is an estimated map of the tornado path from yesterday. The NWS has given the damage a rating of EF1 with winds near 90 mph and ruled that the damage south of Greene County was caused by straight-line winds. If you click the image to enlarge, you can clearly see that the tornado was east of the the city limits of Paragould. I have heard that the sirens did not go off in Paragould and if you notice on the map... that was a good call. They are tornado sirens, not straight-line wind sirens. The tornado warning was issued for threats outside of Paragould's City limits.

As I mentioned on the news, Facebook, and Twitter... Tornadoes in June are RARE in Region 8. In fact, Monday's tornado in Greene County was only the SECOND tornado in June since 1873. In 1954, a tornado touched down on South 12th street between Linwood Cemetery and what we now know as AMMC. If we had a skycam in 1954, this tornado would have video! Here's a map of the F2 tornado that hit in 1954 (click to enlarge): 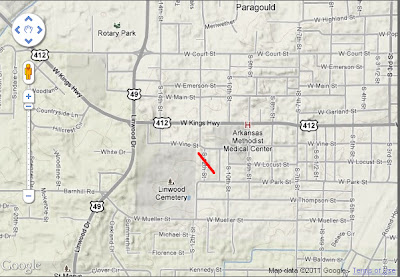 .
Here are the number of June tornadoes since 1873 for the following counties.


As you can see, these numbers are rather low. Having a total of 1-6 tornadoes in your county over 138 years is quite impressive. Let's not let our guard down in June, but let's also realize how rare it was to see a tornado in Greene County yesterday!
Have a great week,
Ryan
Posted By: Ryan at 1:18 AM