With all of that said, we still had people surprised by the storms. I think when we get into the summer months, people let their guard down. Granted, we only had a 30-40% chance of rain, but that does not mean you can't have severe weather. People think that if it is not 80% or higher, they will stay dry. Let me put this in perspective. If your doctor told you that there is a 30% chance that you will die of a heart attack today, you would be scared to death. When we say there is a 30% chance of storms and some could be strong, most people think they will stay dry. Perspective. Let me get back on track! Ha!
Here is a look at radar at 11:10 am yesterday. Also plotted on this map from the NWS are the storm reports from yesterday's storm: 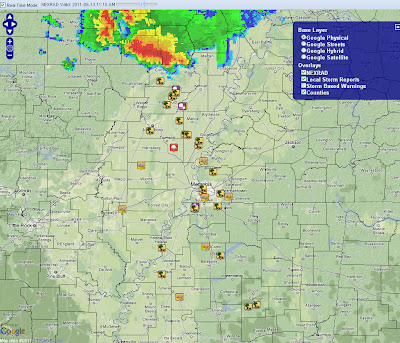 If you notice in the above image, the storms are entering Arkansas. We already had warnings for counties in Southern MO and the NWS had issued warnings in NE Arkansas, providing as much as 45 minutes to take cover. This next image is at 11:35 am and the winds are really starting to get wild with the storms as they move from Clay County into Greene County. Notice the storms reports from the storm as it raced south. Click the image to enlarge. At this time, SVR warnings were in effect, giving people a 30-45 minute warning: 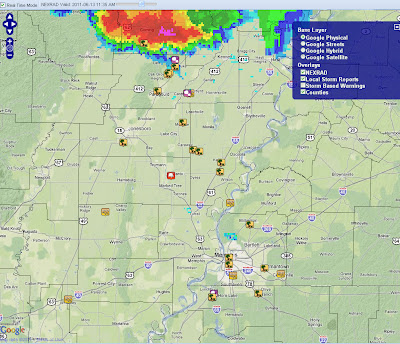 This next image is from 12:05 PM and the wind damage had occurred in Paragould with numerous trees down, some structural damage, and signs damaged. 4 minutes before this image, a tornado warning was issued for parts of this storm (click to enlarge): 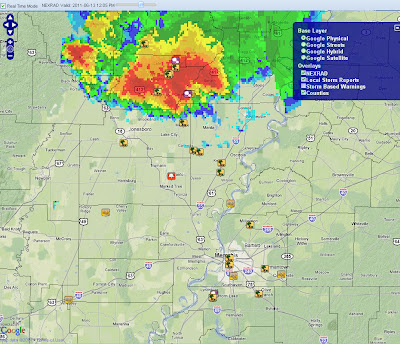 The storm continued to race south with 70-80 mph wind gusts! Parts of Craighead and Mississippi County had extensive wind damage. This radar image is from 12:25 PM: 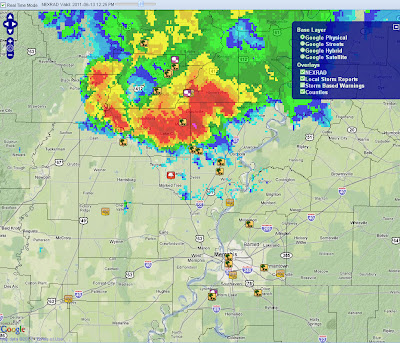 Even though the rain had not arrived in many locations, the winds arrived much earlier causing a major dust storm in many areas. Take a look at this wild footage from Caraway! This was taken from Bryan McCormick of Region 8 News:
The NWS should be in Region 8 today to survey the damage and to determine if we had a tornado. There were some indications of a tornado on radar from SE Greene County to Mississippi County, but the surveys will determine what caused the damage. Regardless, the straight-line winds need to be taken seriously and those winds caused most of the damage from yesterday.

As we head into the summer months, let's make sure we have a way to get the warnings. There are several ways to get instant warnings:


Stay "weather aware". The warnings were there, but if you do not have a way to get them... they are worthless to you.
Take care,
Ryan
Posted By: Ryan at 10:09 AM

I think a lot of Caraway was cought off guard because we had no electricity long before the storm hit. I looked at the weather right before our electricity went off and the storms weren't even in Craighead county yet.

Good point! I did not think of that.

I live in Jonesboro and my daughter and I we were full aware of what was going on. Saw the twitter and facebook comments from KAIT8 then turned the tv on and watch it all unfold. You and Justin and Sarah do a wonderful job on keeping us informed with this storm and all the other storms we have had. Like you said I think people were off guard because its summer and think we cant get any bad storms in the summer just the spring. My daughter even said "Why are we getting storms now its summer" Here in the south we always have to be on guard with the weather.
Thank you Ryan and your team you guys do a wonderful job keeping us informed.

I live in Caraway and our power had been going off and on before the storm even hit. I was watching KAIT8 and when they said there was a Tornado Warning for Greene County and the Northern Part of Craighead County, I got my kids up. Just shortly after that, our power went off and it was when you was saying something about Leachville and Monette. That was the last thing I heard. At that time, I think maybe 1 of the sirens here in Caraway went off and not everybody heard it. I just happen to hear it and as I was heading out the door, my husband, who works in Monette, called me on my Cell Phone and told me to get to the Schools Storm Shelter ASAP! It was a tough ride and drive out there. It was almost like it was night and the sky was orange looking as well. I do have a Cell Phone but it doesn't allow things like some of the Contract Phones do. We just have the Pre-Paid Cell Phones. So, anywho, you and J-Lo did a great job while I was able to watch yall on t.v. Keep up the great work.