This is one of those awkward times when some people are making it sound like we are going to have a major tornado outbreak and I'm not even completely sold on severe weather. I think we will hear thunder, see some heavy rain in spots, and may even see a few severe thunderstorm warnings, BUT it does not appear to be an impending severe weather outbreak. Let's look at data. First, this is a program we use called BUFKIT to chew on the data and display it. This is the NAM model: 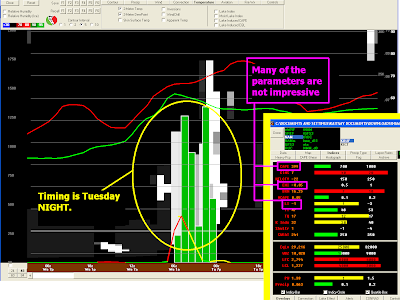 The above image shows a lot of stuff, because I put two windows in one. More or less, the green bars show when it is going to rain and how much and the box on the right shows some numbers that help us determine the severe weather threat. First, most of the rain will be after sunset and we should see between 0.50"-1.00" depending on isolated downpours. Second, let's look at some severe weather parameters. Click image to enlarge, if you wish. First, NAM shows CAPE (instability) peaking at around 400. That's enough to see some isolated storms, but not that impressive. Areas in OK and WESTERN AR may see this number go above 1000 at times over the next 36 hours and they have a higher severe weather threat. The EHI number is not concerning and the Lifted Index, which I have spoken about before... also, not impressive. It's at -1 according to NAM and should be lower for severe weather.... like -4 or lower. There are several other things to look at, but the overall trend is that this is not a severe weather outbreak. Storms: YES. Thunder: YES. Some Watches and Warnings: Probably So. Outbreak: Doubt it. 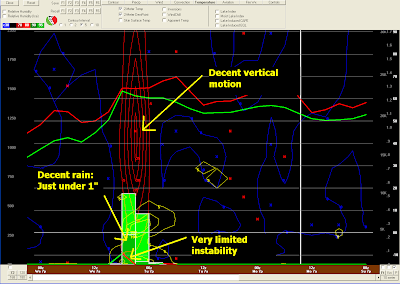 GFS model has pretty much come in line with the NAM as well. Most of the rain is after dark with limited instability.

I'll still be in the Storm Center as the storm system moves through and I'll be giving updates as needed. Follow me on Twitter and Facebook as well.

Prepare and stay informed, but don't alter your plans too much.
Ryan
Posted By: Ryan at 9:25 AM