The past 35 of 36 days have been above average. When showing the Almanac, I noticed that many of the record highs are from 1910, so I pulled the old climate logs for Jonesboro from 1910. I wanted to see how warm it was in Jonesboro in March of 1910, but I also wanted to see how the Summer of 1910 looked as well. Did a warm March lead to a warm July? Let's start by looking at March of 1910: 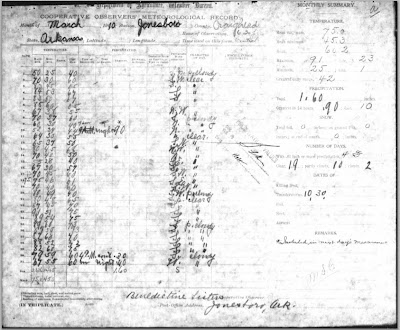 You can click the image to enlarge, but you can clearly see that it was a warm month in March of 1910. It was a little drier than the month we are in right now, but the temperatures sure do remind us of the March we are seeing now. The average high in March of 1910 was 75. Now let's look at July of 1910: 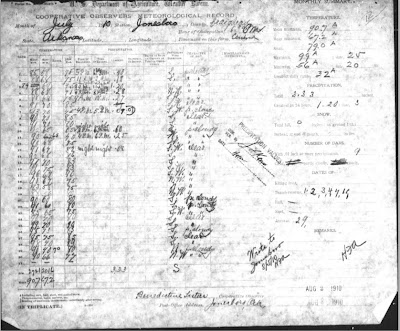 You may be surprised to know that July of 1910 was average! There was also some decent rainfall, with a total of over 3.00". Not too shabby in July! I'd love to have a July like that!

So, can we project much from this climate data? Well, not too much. It does prove that a warm March does not automatically mean we are going to be in a blazing drought this Summer!

Enjoy the warm weather!
Ryan
Posted By: Ryan at 5:49 PM

It would be cool if you added an "email alert" option for your blog. Then when you update the blog we receive an email alert.