Many people have asked if this is the coldest March ever. The answer is no, but it is one of the coldest! Here is a list of the Top 10 Coldest Marches on record so far (from NWS Memphis). If the month ended today, it would be the 6th coldest on record with an average temperature of 44.2 degrees. This month is not on the list until the month is over: 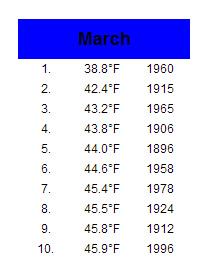 As you can see, it has been a long time since it has been this cold in March. One recent year that shows up in the Top 10 is 1996. I decided to see how much severe weather we had in April, following such a cold March. In Northeast, AR, the severe weather reports were VERY low. In fact, there were ZERO tornadoes in April of 1996 in Northeast Arkansas and ZERO in May of 1996. With that said, in north-central Arkansas, there was an F4 tornado in Stone and Izard county that killed 7 people on April 14th. There was also a severe weather outbreak on the 20-21 that produced numerous tornadoes in Indiana and Illinois, but Region 8 was spared.

So, what do we draw from that? Honestly, not that much.The overall pattern was not too far off from what we have now, but that is still only one year. Sure, there was only one significant tornado in the Spring of 1996 in Region 8, but it only takes 1 significant tornado to cause huge problems. Let's still be prepared for April and May, but hope for the best!

Thanks and yes by far hope and pray for the best!