20 Years Since The "Trick or Treat" Snowfall

It's been 20 years since kids were Trick or Treating in the snow in Region 8. Snowball fights on Halloween night in Arkansas may be weird, but that's what happened almost 20 years ago. When you hear about this night, it's always referred to as the time "it snowed on Halloween", but it was not ACTUALLY Halloween. You see, Halloween fell on a Sunday and many cities in Region 8 chose to trick or treat on the night before. So, the snowfall was actually on October 30th. The above image shows the strong upper-level low that had dipped south to help bring the snowfall. This is Saturday evening's 500mb map.

I decided to dig up some old climate logs to see what was written about this snow event and this is what I found. Here is the Jonesboro log for October of 1993 from Terry Wood. Click image to enlarge: 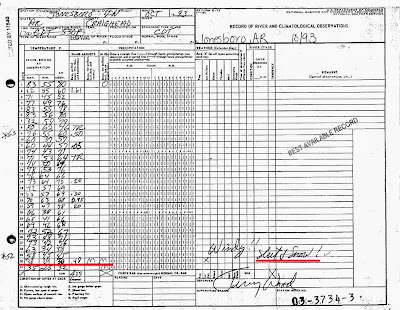 Notice, Terry logged that we had sleet and snow, with about a half inch of accumulation. Some places had more accumulation than others. Here is the historical log from Pocahontas. They has a nice snowfall, with accumulations of over an inch! Region 8 Weather Watcher, Jason Hampton, said they were having snowball fights in Randolph County as they were Trick or Treating! Click image to enlarge: 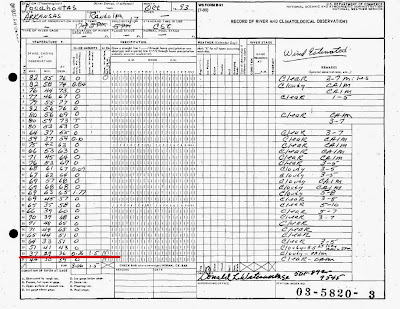 Finally, let's check one more location from that day. This climate log came from Doniphan, MO. Notice, over 2" of snow reported! Once again, click image to enlarge: 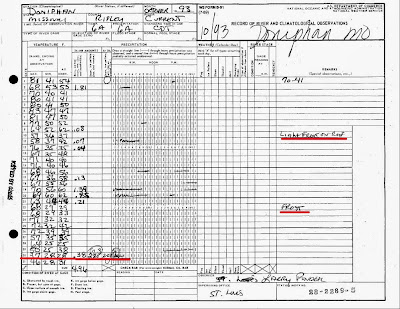 I hope you enjoyed taking a look back at the "Halloween" snowfall of 20 years ago. As more blasts of cold air continue to move into Region 8, we will have to start looking for the first signs of wintry weather!

I can remember this snow,i was out with my son while he was trick or treating,in Caraway.

I was living in Cape Girardeau at the time & I remember it snowed there too! I was a spring chicken-only 23 years old!

My high school band marched in the SEMO homecoming parade that day and it snowed on us! I remember having to be outside all that day in nothing more than a leotard, pant hose & boots! COLD!!