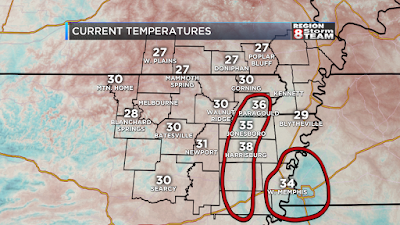 If you looked at the temperature map this morning, you may have noticed that some areas were warmer than others."Oddly" the warmer spots were the "higher elevations". We have grown up always knowing that mountains are colder than valleys. The higher elevations are typically colder due to difference in pressure and lapse rates. What we saw this morning was a different mechanism. Actually, we could see TWO mechanisms making for warmer areas.

First was the warmer temperatures we saw on Crowley's Ridge. Temperatures ranged from 35-38° along the ridge, while areas around the ridge were 27-31°. This was some of the coldest air in 255 days! The reason that the ridge was warmer was because colder air is "heavier" and flows off of the ridge into the flat lands. There is not enough of an elevation drop to have the air heat up through compressional heating. Therefore, the ridge is warmer. I also think vegetation along the ridge is a factor to be considered. Most fields are dirt right now with no vegetation.

Most of us had a good frost and many of us had a hard freeze. Say bye-bye to allergies and mosquitoes!

Could you please do another winter outlook