Odd Story from the Christmas Eve Tornado Outbreak of 1982 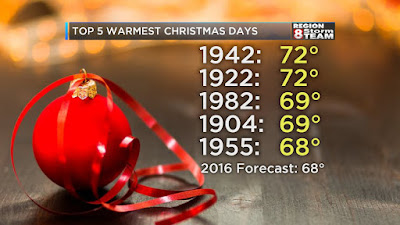 When I posted this graphic of the Top 5 warmest Christmases, many people pointed out that 1982 not only had a warm Christmas, but had tornadoes on Christmas Eve. Since I was only 4 when this happened, I wanted to research this tornado outbreak a little. 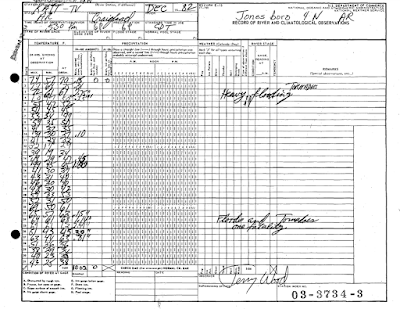 I first grabbed the climate log from Terry Wood from that month (above). Terry always did a great job making notes regarding big storms. Sure enough, he mentions the tornadoes on Christmas Eve and even mentions that there was a fatality. I searched a little deeper and found out that this fatality was from a long track tornado in Sharp, Randolph, Oregon, Ripley, and Carter counties:

Here's the summary of this tornado from Thomas Grazulis:

Moved Northeast from about 5 miles Northeast of Hardy, Arkansas, destroying three homes in Arkansas (near -F4) where the funnel was almost a mile wide. Crossing into Missouri, 3 miles West Southwest of Myrtle, the damage extended to 1.5 miles West of Riverton, passing 5 miles North of Bardley, and ended 6.5 miles Southeast of Van Buren. As the tornado passed 4 miles south of Eastwood, Missouri, a man was killed and his wife injured in a trailer. Their home was destroyed by a tornado on December 2nd (just three weeks earlier) and the family had moved the trailer onto the house site.

Did you catch that? The man that died had lost his home 3 weeks prior in a tornado outbreak. If you look at the first image I posted, Terry mentioned this tornado outbreak, too. 2 tornadoes hitting the same property twice in a month is extremely rare. Here's where the two paths crossed in Carter county: 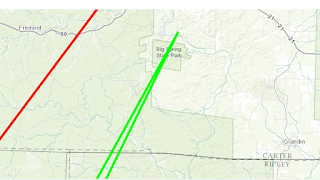 This year, storms are expected on Friday night and on Monday morning, but I'm not too concerned about tornadoes this year. We will watch it closely though.

We had a tornado in Woodruff County that year, too. It damaged the American Greetings factory pretty badly. My uncle had a small plane and took us flying after dinner. The damage from the air was stunning.