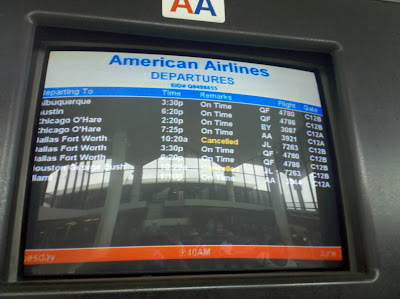 Not many flights were canceled this morning, but one of the ones that were canceled included our flight to Dallas, which would lead us to our connection to Seattle. Transferring flights for a group as large as ours is a challenge, but our tour guide, Greg, is doing great.

18 people in our group got direct flights to Seattle and ended up in a much better position, but a handful will not arrive until midnight. We're with the group that arrives around 8pm. It's nobody's fault, just a side effect of travel.

As I sit here and blog from the Memphis Airport, I realize that we may be a little later than expected, but should still end up in Seattle tonight and be on a boat in Alaska tomorrow!

I think Dallas was having some Thunderstorms earlier this morning and that may be why some flights were cancelled. I hope you have a wonderful trip and I look forward to seeing some pictures from your Alaskan Cruise. I've never been on any kind of cruise, but hopefully someday I will be able to go on one.

Good luck and safe trip! I have always wanted to visit Alaska. Maybe I will eventually get to go!