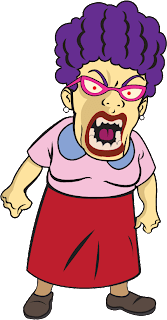 Tomorrow is the start of December! It's the first day of Meteorological Winter, which simply means that us weather geeks count by months and Dec, Jan, Feb, and Mar are winter. More importantly though, it is the happiest month of the year! Right? I don't think so...

It sure seems that we have a lot of angry people in the world. I'll admit that even I have been a little grumpy over the past 2 days. I blame it on being sick, but even if I were not sick, I could come up with another excuse.

On my way to work today, a lady in a white Lexus zoomed beside me in the fast lane and was slowed by someone driving slow in the left lane. I was going a little faster and she got into my lane and rode my bumper. Keep in mind, I'm in the slow lane going 5 mph over... so I'm not going to speed up for her. She's hitting the steering wheel, yanks it back and forth between lanes until she can squeeze through. I understood her frustration. I get mad at people who camp out in the fast lane, too. But I never get mad at the people in the slow lane going 5 over! Here's the kicker though... she turned 2 blocks later. What?

Fast-forward to tonight. We are airing the Arkansas Razorback game on KAIT and preempting The Middle and some other shows. People are MAD. Comments on Facebook, Twitter, emails, phonecalls, etc from people who either want to watch The Middle or just don't want Hog Basketball. Some people don't even know what would be on the channel if the Hog game was not on! They are just disgruntled ASU fans that think we are trying to convert them! Settle down everyone, anything you missed can be found tomorrow on www.kait8.com on our episode player. It's a TV show. Calm down. If you don't like Razorback basketball, I understand! I don't either. Take the time to turn off the TV and enjoy your family. It won't hurt our feelings. With that said, there are A LOT of Razorback fans watching the game and enjoying it tonight. More power to them.

As we enter into December, be happy. Stop getting so worked up over things. I have several more examples, but I'll pass for now.

Have a great week everyone!
Ryan
Posted By: Ryan at 8:22 PM

I completely agree with you. I have noticed on facebook, most went from saying one thing they are thankful for each day to mad/sad/whining/bitter/negative comments. My friend had a genius idea. She said instead of being completely negative, compliment the comment with a positive note. Such as "My feet are killing me, but at least I able to get up and walk freely and allowed the opportunity to do the job I love." I think your idea is genius too, and I don't even watch sports. Family time is always great.

Don't read the Facebook comments huh, lol you've got a whole paragraph now dedicated to them, ha Ha I can take it or leave it, I didn't watch the other shows either so I can't throw a mega fit about it. Now fast cars in the slow lane...I'm not even going there..they wouldn't allow me enough characters...ha! Anyway, just my 2 cents.

I am someone who drives back and forth from Jonesboro to Paragould daily. I am purposely selling my home in paragould to move to jonesboro just because of the commute between the two cities. It's so frustrating to deal with the left lane campers. I call that the Cell phone disconnect lane, because when you do pass someone that is camped out over there, they are generally texting or talking on the phone and their brain is disconnected from their foot. They built a fantastic bypass around brookland to make the commute faster, fail, how about its the other way around. As for the game/shows on the channel, I think my tv has about 800 other channels. I chose a different one. These are the same fools who toss a huge tantrum when you break in on the shows to talk about tornado's. Saving lives is not important enough to break into their show, yet as soon as you don't then it's your fault because you failed to let them know in advance. lets just say, if I was in charge of the gene pool, I know who I would need to remove. ;o) Keep up the good work and screw the rest of them.

You are right. Grumpy and selfish are the new norm. Wish I knew how to fix it. I miss the old fashioned civility that used to be the norm.