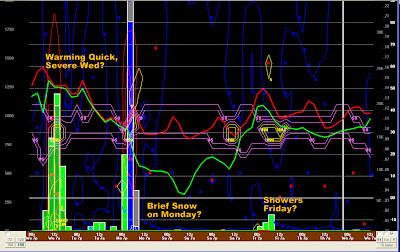 We have some active weather POTENTIALLY coming next week. The above image has a lot of stuff on it, so let me explain some of it. This is a tool we use to forecast and it is showing the morning run of the GFS model. It reads from right to left. The red line is the temperature, the green line is the dewpoint, and the bars represent precipitation.

First, lets talk precipitation. We now have rain in the forecast for Friday, as the front looks to have a little more moisture than previously thought... but still not a lot. It's the small area of green bars on Friday. Then there are two periods to watch next week. FIRST, is Monday. Cold air will be in place this weekend, but warmer air will be trying to move in on Monday. This poses a problem when trying to forecast precipitation type. I'll explain shortly, but the blue line is trying to indicate that it will start as snow. Not so fast though.. I do not trust the algorithm here that says snow. I'm thinking it starts as sleet. I'll explain why shortly.

Lastly, look at the red line climb by the middle of next week. That is warm air ahead of a storm modeled to come through on Wednesday. It's really early, but the dynamics and energy may be in place to support severe weather. IF it still looks like this in a few days, I'll dig in on the details. Now let's go back to Monday.... with this graphic: 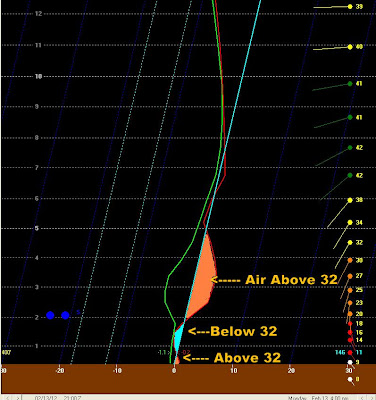 This is a vertical representation of the atmosphere as indicated by the GFS model for Monday afternoon. The blue line is the freezing line as you go UP through the atmosphere. I have marked the area of the atmosphere that may be above 32 degrees. This area is important, because it is where the snowflakes would MELT as they fell. BUT, the GFS is showing about 1,000-1,100 feet of freezing air just above the surface. The drops (melted snowflakes) could refreeze and become sleet before they hit the ground. There is a small area of temperatures above freezing near the surface, but if this verified... it would likely not be enough to melt the sleet. Regardless, we would hopefully be above freezing at the surface, causing no problems on the roads. THIS IS STILL WAY EARLY THOUGH! Lots can change and likely will before next Monday. Stay tuned!

As you can see, forecasting precipitation type will be difficult on Monday, but we're up for the challenge!

I'm still not sold on the idea of winter wx. I think it will be too dry and then too warm, well at least that is what I want the wx to do.

I'm ready for spring but I'll take the cold just to get rid of the skeeters, so far we've had no winter, and let's just say I hate skeeters:)

Ryan said it might. I trust that man through all his forecasts. Pretty smart fella;)