You may have heard us talk about a "second" severe weather season in Region 8. It's a period in the fall when the probability of severe weather goes up a little. Let's focus on Tornadoes, though. Have you ever wondered what day of the year has the highest probability of a tornado to occur within 25 miles of Jonesboro? If so, here's your answer, May 1st. 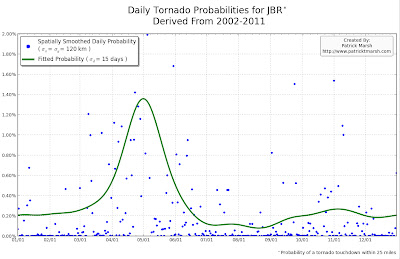 The above graph (click to enlarge), created by Patrick Marsh from NSSL, shows the peak of tornado probability. In addition to the peak around May 1st, notice the slight increase from now until the first week of November. This shows us that our chances are a little higher over the next few weeks, based on what has occurred in the past. Also note, it's nowhere near the probability we have in May, but we should be aware of the increased chance.

Since Patrick is cool friend, he also created a map that shows WHERE tornadoes have occurred within 50 miles of Jonesboro since 1950, their rating, and their path. There have been 313 of them since 1950: 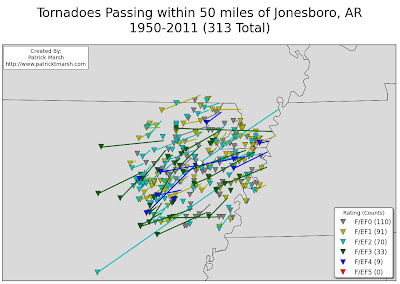 What do we take away from this? Well, as we start the month of October, let's be mindful that severe weather, including tornadoes, is a little more likely than the past few months. Let's make sure we remember our tornado safety precautions:


Speaking of weather radios, we will be at Bartons in Lepanto on Tuesday, October 2nd from 11:00 to 1:00 to program weather radios. Other stops this month include the Bartons in Jonesboro, Walnut Ridge, and Pocahontas. Stay tuned for those dates.

Big thanks to Patrick Marsh, who has ties to Region 8. His father works with Arkansas Methodist Medical Center, a GREAT partner of the Region 8 Storm TEAM and KAIT.

I have heard/read in the past month that Arkansas should expect more of a threat of severe weather this fall/Winter due to El Nino. I thought that it was forecast to have a weak to moderate El Nino effect this winter. I am assuming that forecasters are just making us aware of the "possibility" of the severe weather but there is not a major change expected?