There's a lot of weather to talk about over the next week. My philosophy is typically to take one storm at a time, but there is just too much ahead. Below is a program we use called BUFKIT. If you have read the blog in the past, you know that it is a program we use to look at model data and we can graph numerous variables on one screen. Oddly, the the timeline goes from right to left. Notice, there are three distinct time periods to watch: 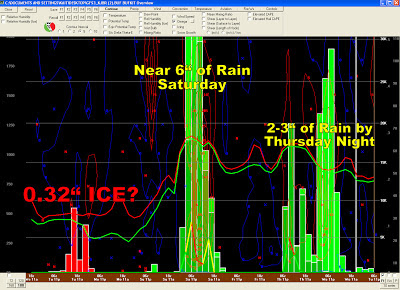 The green bars show rain. We are expecting 2-3" of rain over the next 36 hours with some places seeing even more than that! Flooding may become a concern, especially as the next storm system comes in on Saturday. GFS model for Saturday is showing close to 6" of rain! Keep in mind, this is a model and not a forecast, but could easily become reality. Then, things get interesting. The third system will be coming into some very cold air. At this time, it does not look like snow. It looks like ICE or maybe SLEET. Review lesson. Sleet falls as little balls of ice. Freezing rain falls as liquid, but since it does not have time to refreeze before hitting the ground, it falls and then freezes on all exposed surfaces. We like to refer to it as liquid death because it is the most dangerous to drive and walk on, and causes the most power outages. The GFS model is showing 0.32" of ICE at this time. It does not take much at all to cause problems. 0.25" can cause power outages. LISTEN. This does not appear to be as bad as the ice storm from 2009, but needs to be watched.

So, you may be asking, why is it ice or sleet and not snow? Let's get a little more technical and show you a forecast sounding for next Tuesday. This is a skew T of the atmosphere (with some writing from me) for Tuesday at 8AM. It helps to show the atmosphere from the surface up during a certain time frame: 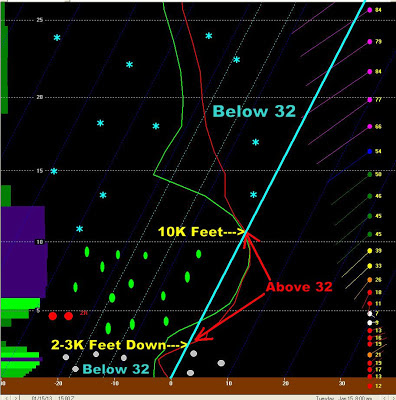 Snowflakes form high in the atmosphere and start falling to Earth. In a snow setup, the air is 32 or below through most or all of the column of the atmosphere and the flakes fall as snow. Problems arise when the air is not 32 or below through part of the atmosphere. That's the setup we may have next Tuesday if things don't change. HOPEFULLY, it changes! Anywho, between 2,600' and 10,000', the GFS model shows that the air is above 32 and the snowflakes would melt into raindrops. At roughly 2,600', the temperature is back down to 32 or below and those raindrops either freeze into sleet of fall and freeze on exposed surfaces. This MIGHT be a sleet setup. That would be the lesser of two evils.

With all of that said, it is still WAY EARLY and this forecast might change. With the overall setup over the next two weeks, I felt it was good to review what ICE (Freezing Rain) is and how we see ICE over snow.

As I mentioned at the top of this blog, let's take one storm at a time! We have a lot of rain that may cause problems before any threat of wintry weather. We even have the chance of some strong storms. Stay tuned and know that Sarah, Bryan, and I will be watching the weather closely!

Thank you for the breakdown! Weather is always a roller coaster in Arkansas, especially this time of year.