How Did We Do on the Spring Snow?

As always, after big storms, I like to check how we performed on the forecast. I do this to learn something for the next time it happens. This storm was the latest snowfall I had ever forecast. Late season/ early Spring snowfalls are rare and they are different storms than we deal with in the middle of winter. As I look at our forecast and what really happened, I can clearly see one positive and one negative.

The negative is that I underestimated the totals. We thought the highest snowfall would be 5", but some places saw 7-8". I thought that the warmth from last week, the late season timing, surface temperatures, etc would hold the numbers down, but apparently not. Now, with that said, you had to measure the snow early today before it started melting! So, here is the data. The first map shows the official snow reports to the National Weather Service and CoCoRaHS observers. The second map is the forecast we had for this storm for most of the week. 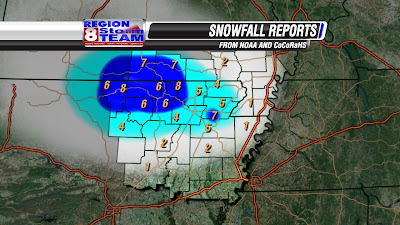 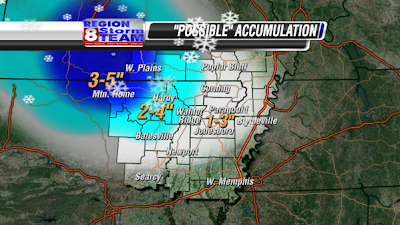 Overall, I'm pleased. Now, it's time to start the transition to severe weather mode. I have a feeling that April and May are going to be active.

I thought your forecast was right on. I was very pleased with the forecast, just wasn't pleased with the weather we got. This, on Christmas Eve afternoon and night, would have been AWESOME! LOL!