As I typically do after a tornado hits Region 8, I'm going back and looking at radar images closely to see what we can learn for future storms. While the NWS has not confirmed a tornado yet, I'm 95% sure it was a tornado that hit Caraway.

After the storm hit, a lot of rumors were floating around on social media. The most widespread rumor was that 10 kids were missing that were Trick or Treating. Everyone ended up being accounted for and that story was stretched a little, but before I found out the facts, it hit me hard. As I said though, as of midnight, everyone is safe.

Let's take a look at some of the data on radar. First off, this is a new product that we can show. It's a derived product that shows where the greatest wind shear was occurring. Each area of shear below was a different time-frame. Do you see the yellow areas near Caraway on two of the scans? That was the likely tornado. Remember, click on the images to enlarge. 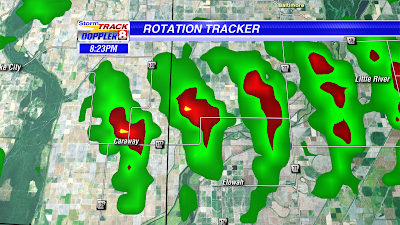 During the tornado coverage, I showed this product below. It's shows the correlation coefficient or difference in height and width of objects being detected by radar. This helps us see debris because it's CC is much different than most precipitation. Do you see the small, round, blue area SW of Caraway (below image). I believe that was tree debris from the swampy areas in the St. Francis river. Judging by radar, the tornado formed SE of Bay, crossed the St. Francis river, and hit Caraway. 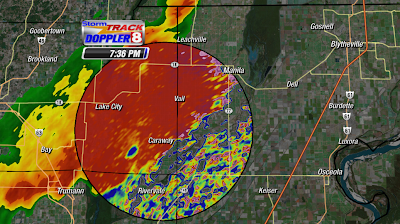 Here's the possible debris signature as it came into Caraway... 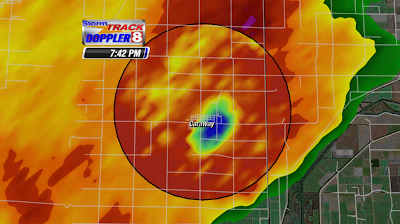 After the rotation goes through Caraway, causing a lot of damage, the debris signature continues moving northeast toward highway 77. 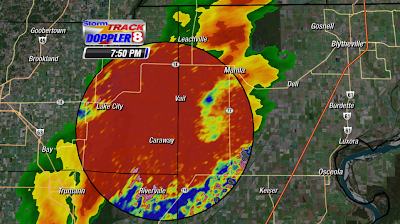 Another radar product that we show a lot in tornado coverage is the velocity product. This simply shows the wind speed and direction. The red areas show wind going away from the radar site in Memphis. The greens and blues show wind coming toward the radar site. Here are three radar scans of the rotation as it comes into Caraway: 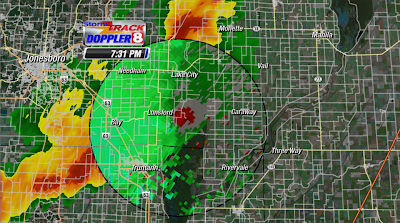 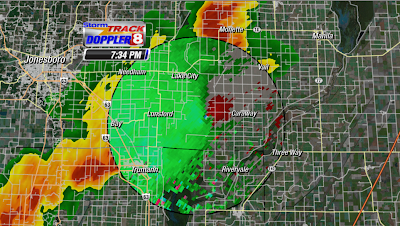 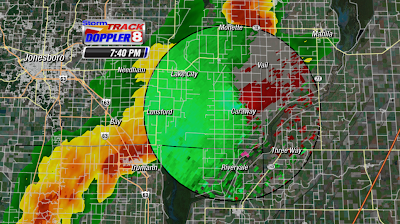 Finally, how about a 3D look at the storm structure? These storms were not building up too high. They are called "low-topped" storms, but as learned tonight... they can still pack a punch! Notices the weaker echoes where the tornado occurred. That's called a BWER or Bounded Weak Echo Region. It's the lower reflection, where the rotation is located. 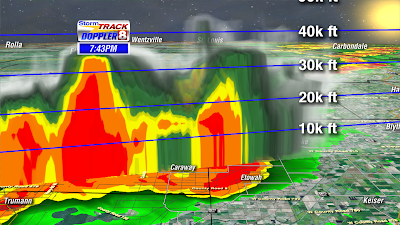 I was going to write more, but I'm tired and going to sleep! I'm glad everyone is safe tonight and I may type more tomorrow.

I hope to be LIVE in Caraway tomorrow, so stop by and say "hi" if you live there!
Posted By: Ryan Vaughan at 12:14 AM